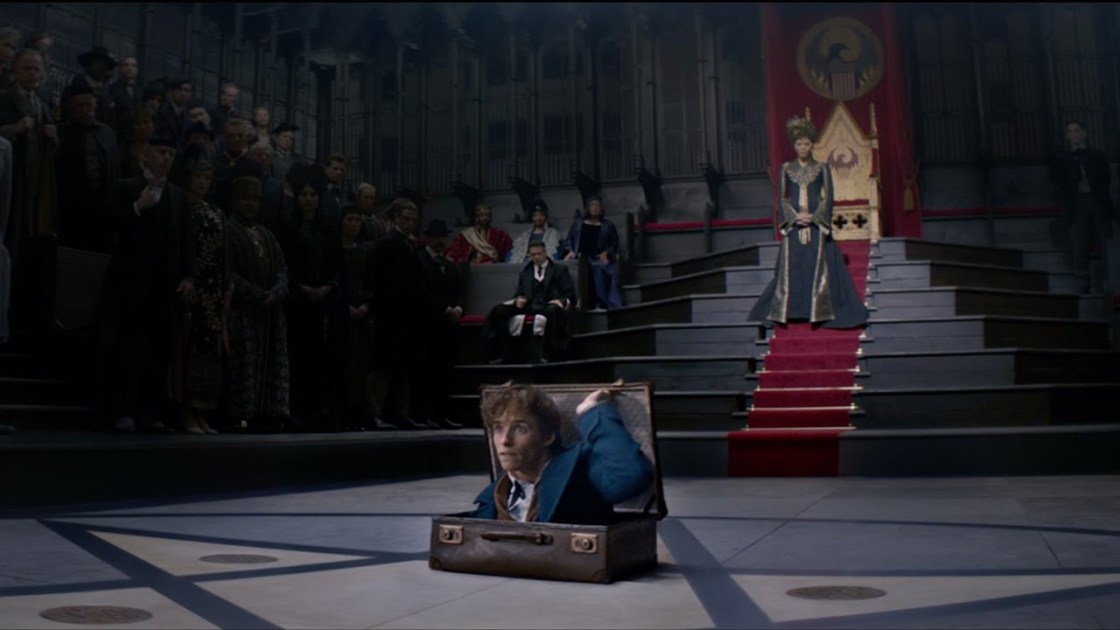 Review: Fantastic Beasts and Where to Find Them [SPOILERS]

[Spoilers ahead for Fantastic Beasts and Where to Find Them! If you have not seen the movie, YOU HAVE BEEN WARNED. Proceed in caution!]

Yesterday, I finally got to experience the new Harry Potter movie…that is not about Harry Potter.

And yes, I know that was ‘punny’ but truly it was.

What about this movie is fantastic? Let me tell you.

The time period. The movie is set in 1926 New York. The fashion, prohibition. Everything about the 1920s but with a magical twist. This time period was known as “the roaring twenties.” Everything was bigger and grander not only in fashion (have you seen The Great Gatsby?), but also in culture. There was also the whole prohibition thing going on. There were speakeasies. This movie is different than the Harry Potter books and films  because it is set in a different time period and area. It gives us a whole new perspective on the magical community.

The magical community in America is vastly different. Witches and wizards are required to have a wand permit. A wand permit! Isn’t that just wacky? Magical folk are not allowed to marry or even befriend No-Majs (No Magical) at all. I agree with my new favorite character that this is a backwards way of thinking. Although, considering where we are. This is not only the 1920s where tensions were high from after the war. But it is America. Everyone remembers the Salem Witch Trials. Perhaps that is why No-Majs are seen as dangerous? Of course there might be another reason…but we’ll get to that later.

We find out about the American magic school, Illvermorny! Founded by Isolt Sayre, a descendant of Salazar Slytherin and the Morrigan, she founded this school in Massachusetts and was credited to having wands in the Americas.

The wonderful Goldstein sisters, Tina and Queenie attended this school (Thunderbird and Pukwudgie respectively. I’m a Pukwudgie – as well as a Slytherin) and got into a cute little argument with Newt Scamander which school is better. (Hogwarts or Illvermorny? Personally, I think they both are grand!)

Now onwards with my new favorite character: Newt Scamander. As I posted on Facebook while watching the movie: “Newt Scamander is my new love. He is such a darling sweetheart.”

The entire movie, even though he got arrested and nearly killed, he only cared about his creatures. Bravo to Mr. Eddie Redmayne to giving us such a dynamic and emotional male character. Great job, sir. *applause*

One of my favorite scenes – and the most tragic – was when Newt, Jacob and Tina were in jail. Newt was explaining what an Obscurus/Obscurial was.

What is an Obscurus?

“Before wizards went underground, when we were still being hunted by muggles, young wizards and witches sometimes tried to suppress their magic to avoid persecution. So instead of learning to harness or to control their powers, they developed what was called an Obscurus.” (Newt Scamander).

An  Obscurus is a parasite that develops in a young witch or wizard who is forced, through physical or mental abuse, to suppress their magic. Their magic goes inward which is dangerous and causes the child, called an Obscurial, to act oddly and in moments of great emotion (such as fear, anger, sorrow) to explode. Their Obscurus goes outwards and can cause great destruction.

“It’s an unstable uncontrollable dark force that busts out and attacks, and then vanishes.” (Tina Goldstein)

Newt met another Obscurial three months before the movie’s story. The girl was 8 and she died. That tears at my heartstrings. How terrible is that? Most children don’t live longer than 10. The exception to this being Credence Barebone (possibly Ariana Dumbledore as well).

Before we get to the tragic life of Credence Barebone…

Obscurus. Obscurial. The idea of these existing is devastating. I believe that an Obscurial can be related to the real world as well. Are there not people who suppress their true selves? Yes. Let me put it in perspective for you…Imagine if Harry Potter was an Obscurial. Picture that for a moment.

It seemed like the idea of an Obscurial to Madame President Picquery was truly unbelievable She claims no one has seen an Obscurial in centuries. Yet, we now know this to not be true. According to the great and wonderful J.K. Rowling: “An Obscurus is developed under very specific conditions: trauma associated with the use of magic, internalized hatred of one’s own magic and a conscious attempt to suppress it.”

It’s a war within themselves. They have magic. Some might even love/enjoy their magic but then, they hate it at the same time.

Based off the wonderful J.K. Rowling and Madame President Picquery, if Obscurial is rare. What does this mean? It means that the idea of an Obscurial is devastating for the magical community. A child who is ashamed of magic and in the end, they die. I have a feeling that if anyone could figure out how to save a child who has an Obscurus, it would be Newt. (Please give us that story J.K. Rowling.) I feel like saying those words (Obscurus/Obscurial) is a taboo in the wizarding (witching) world.

Credence Barebone. Poor Credence. Is he dead? Personally, I don’t think so at all. Now J.K. has said that he is an important character. Who is he then? I certainly hope this isn’t the last we see of Credence. And if Credence is alive, you can bet that the wonderful darling Newt will do everything he can to help. I believe Tina will as well. After all, Tina lost her job because she attacked Mary Lou Barebone for whipping Credence. I hope that in the next film that Credence’s background will be further explored in the next films.

Of course there will be more films. This was the beginning of the new movies which are supposed to end with the battle between Grindelwald and Dumbledore.

Gellert Grindelwald. The first Dark Lord. And the love Albus Dumblerdore’s life. It will be interesting to see how they address that in the upcoming movies. We have a while for those unfortunately. I will admit finding out that Percival Graves was Grindelwald was like a BAM, hello dark overlord. Where did you come from? Better yet: HOW THE HELL DID NO ONE KNOW THAT JOHNNY DEPP WAS IN THIS MOVIE? Seriously, way to keep a secret. That was fantastic! It was like “Oh, hello, Johnny. Where did you come from?”

Even before I knew Graves was Grindelwald, there was something…off about him. Was he charismatic? Yes. But sinister. He reminds me of Negan from AMC’s The Walking Dead. That same charisma but sinister. You love to hate him but you hate to love him. I feel like that is how Grindelwald’s character will be shown. I look forward to Johnny Depp’s performance.

All in all, I loved this movie. I liked the darker edge. (Hello, the scene where Tina and Newt are about to die. And Tina literally watches her life pass her by and she’s in a trance, wanting to jump into the pool – into her death. Yeah. What a fucked up way to die. It’s painless. Hell no it isn’t.) I hope that this darker edge continues.

The big question is: who are they going to pick for a young Albus Dumbledore? Any ideas? Post in the comments!